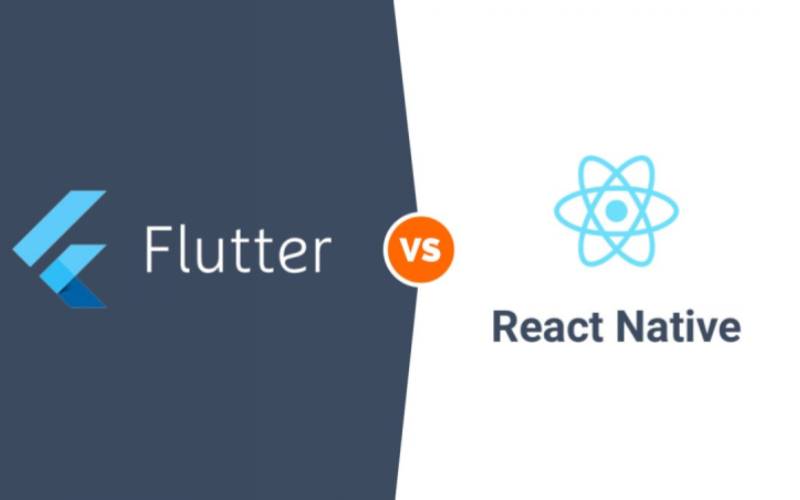 Do you need to develop mobile apps quickly? And reduce costs with cross-platform development, but are not sure which technology to choose?

Choosing the correct framework for your mobile application development determines its efficiency and its set of features. If an app is poorly designed, it will overheat its device, increase wait-time and fail.

In this blog, we’ll compare the top market players – Flutter and React Native – from the app owners’ viewpoint to help you find which framework most closely fits your app plan.

Developed by Facebook, React Native is open-source released on GitHub that supports both iOS and Android platform’s native APIs. On the other hand, Google’s Flutter is a great move, which lets you build Android and iOS highly responsive native apps simultaneously.

In this competitive world, the eventual goal of any Mobile App Development Company is to select a cross-platform framework that should allow developers to write a single codebase and deploy it through multiple platforms. In that way, we can offer help to our customers in selecting the precise framework that might best support them to attain their goals.

Build by Google, Flutter is a Software Development Kit (SDK) that allows developers to create high-performance, high-reliability and very fast applications that can run on multiple platforms like Android and iOS. Flutter is powerful because of it has thin layer of C/C++ code but most of its systems are implemented in Dart which helps developers to easily approach read, replace, or remove. This gives developers great control over the system.

React Native has shown plenty of recognition in recent years, typically from the ReactJS and web platform. React Native is written in JavaScript, which has fired up its acceptance rate for many companies switching over it. At the same time, Flutter has been endorsed profoundly by Google since 2017 and has generated significant interest by the developers. Flutter is new in the competition of the mobile app development industry and has a long potential to go ahead in the competition.

Below is the quick comparison between Flutter vs React Native.

Flutter is an open-source mobile application framework that fully works on a different programming language called Dart. While on React Native, you can build mobile apps only using JavaScript.

Dart is based on C/C++, Java and supports things like abstraction, encapsulation, inheritance, and polymorphism.

For React Native, you need a bridge to call Swift or Android or Windows & Mac APIs, whereas with Flutter, it’s dart, so you don’t need that the whole thing as it would be native; this also solves the problem with the JS ecosystem split between many different versions like CommonJS, AMD.

Flutter has the benefit of Dart, and there is no JavaScript bond for initiating interactions with the device native components; the speed of development and running time accelerate significantly.

React Native’s User Interface is similar to using HTML without any CSS framework. It is built more on the native components both for Android and iOS also better User Experience (UX) when a user taps into the Operating System.

Flutter uses built-in beautiful Material Design and Cupertino like iOS-flavor widgets, rich motion APIs, smooth natural scrolling, and platform awareness. Flutter has its own UI components, material design, adaptable widget sets and an engine to reduce them on Android as well as an iOS platform. Here are a few examples of Flutter Widgets:

Constancy becomes a key factor when you are developing a cross-platform app. As Flutter is much new in the cross-platform industry, the number of businesses that have implemented the SDK for developing their cross-platform apps are very less. But, with the Flutter version 2 just released, which delivers enhanced developer tools and asset systems. Alternatively, React Native showcase page of apps that have been developed using the framework is much higher. It was quite stable from earlier and it also loves the support of a large community of contributors.

About The Dev and Test Guys

Today, businesses are primarily influenced by mobile applications and are acquiring many customers through mobile applications. At The Dev and Test Guys, we understand our customer’s requirements and offer advanced cross-platform development that works seamlessly on all platforms and operating systems like Android, iOS, and Windows. You can contact us to know more about our services.

Leave a Reply Cancel reply
We use cookies on our website to give you the most relevant experience by remembering your preferences and repeat visits. By clicking “Accept”, you consent to the use of ALL the cookies.
Cookie settingsACCEPT
Manage consent

This website uses cookies to improve your experience while you navigate through the website. Out of these, the cookies that are categorized as necessary are stored on your browser as they are essential for the working of basic functionalities of the website. We also use third-party cookies that help us analyze and understand how you use this website. These cookies will be stored in your browser only with your consent. You also have the option to opt-out of these cookies. But opting out of some of these cookies may affect your browsing experience.
Necessary Always Enabled
Necessary cookies are absolutely essential for the website to function properly. These cookies ensure basic functionalities and security features of the website, anonymously.
Functional
Functional cookies help to perform certain functionalities like sharing the content of the website on social media platforms, collect feedbacks, and other third-party features.
Performance
Performance cookies are used to understand and analyze the key performance indexes of the website which helps in delivering a better user experience for the visitors.
Analytics
Analytical cookies are used to understand how visitors interact with the website. These cookies help provide information on metrics the number of visitors, bounce rate, traffic source, etc.
Advertisement
Advertisement cookies are used to provide visitors with relevant ads and marketing campaigns. These cookies track visitors across websites and collect information to provide customized ads.
Others
Other uncategorized cookies are those that are being analyzed and have not been classified into a category as yet.
SAVE & ACCEPT